Hello!
It’s been a long time since I’ve posted here, because… well…basically I’ve been playing the Elder Scrolls Online for the past 16 months… but I’m not playing that anymore because.. well.. cough ..RNG.. cough. It’s not good for your soul…

Mass effect Andromeda was also a complete disaster, I’m not sure how they managed to mess it up so spectacularly but hey… they had a lot to live up to and I think most of the original Bioware team had left etc etc.. but never mind, Mass Effect 1-3 will remain in my heart as the best gaming series ever..

Now.. I want to talk to you about something that is really exciting me…
GOD OF WAR – 2018
My eyes nearly popped out of my head whilst watching the E3 2017 trailer, I got goose pimples all over, I was speechless and at one point I nearly started crying… tears of joy..
I will explain why below.

OK hopefully you have now recovered from watching that trailer… here are some tissues and a glass of water.. you will be fine.. I promise..

Lets look at it in a bit more detail 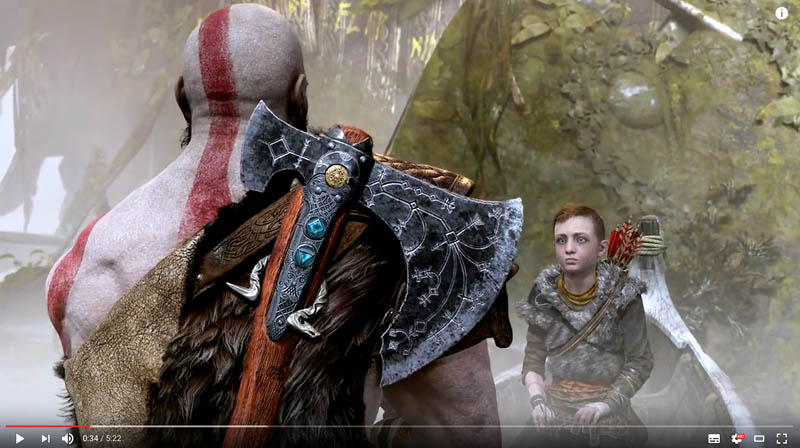 This cinematic where the boy first appears was pure poetry in its timing and execution, this is cinema at its very best.
I have learnt that the game will have no edited camera cuts whatsoever, every cinematic will be one perfectly choreographed camera shot which will hopefully convey a feeling of natural and fluid discovery of a scene.
This is hard to do. This is what cinema was created for, and many have fallen at the feet of artistic annihilation that greets most film makers unprepared for the sheer weight of vision needed to create such scenes.

Also please note the detail on the axe, my heart stopped whilst looking at it, I live for details like this creative artwork and I could look at it for ever.. 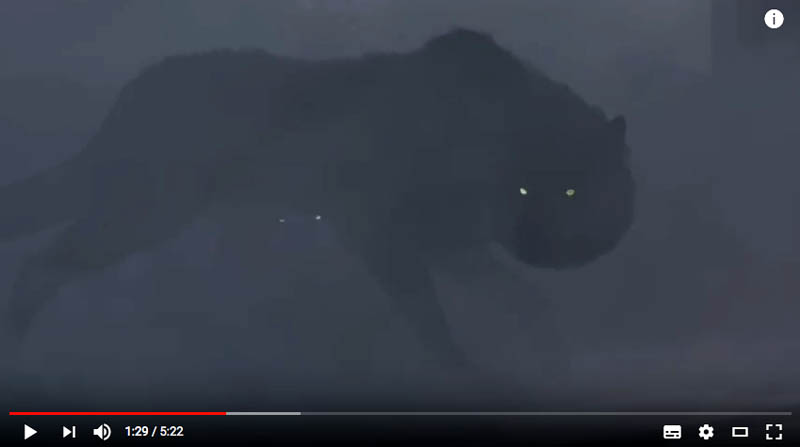 The shot of the wolves is beautiful, apparently these could be a pair of Norse gods in wolf form… its soo intriguing

I love this shot, the lady looks soo beleiveable… I so want that sword too, the knot work of her string vest is also awesome, I love details like that. 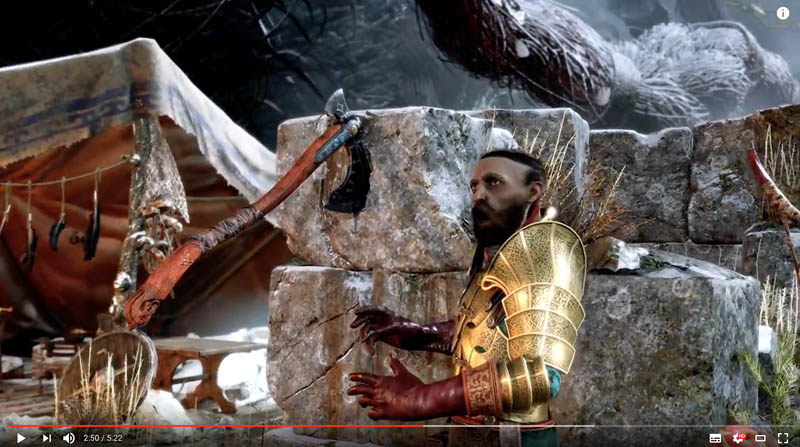 I love the animation and acting in this scene, its rare that we get this level of characterisation in games and it’s probably the most important scene in the trailer for what it suggests about the full game. CHARACTERS WILL BE IMPORTANT … this takes it into its own realm in my opinion, if it can pull off good characters, story, animation, combat etc, I even thought I saw a suggestion of an online sandbox mode… well… if it manages to pull it all off… we will be looking at what is likely to be the best game of the current generation of the PS4 console… yes even better than The Witcher 3… Yes, I called it here first..

Can I just mention how amazing the voice acting is at this stage…. Every voice in the trailer seemed perfectly executed… like going to see a play at the theatre..
The combat also looks lush and the over the shoulder view is perfect for controlling the action whilst experiencing the fight in its full gory glory… the colours of the effects in the fight scenes are also superb… Teal and Coral anyone?? 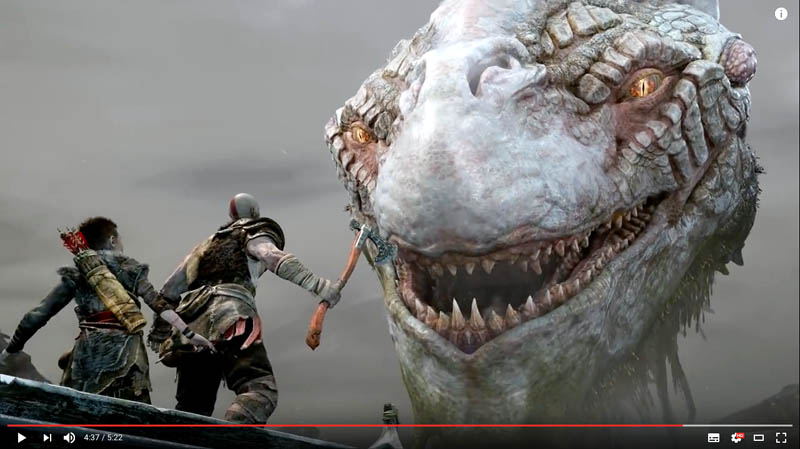 Now… I don’t hink I would have even bothered writing this review had it not been for the final shot in the trailer… THIS is the key shot above all the others mentioned which left me both laughing and crying at the same time..
THE WORLD SERPENT!!!!!!! OMG OMG OMG OMG
Firstly the way it looks! THE WAY IT LOOKS! I’m sorry but I was shitting myself just looking at it but then.. THE SOUND IT MADE…. This is when I started crying.. the sheer joy of experiencing the utmost top of it’s field in sound design which reflected the animation soooo completely .. I was speechless…

It reminded me of when the Lumiere brothers screened the very first movie in a cinema, it was called “L’Arrivée d’un Train en Gare de La Ciotat” apparently the audience were terrified because they thought a steam train was actually in the theater wand was about to run them over..

That is how I felt whilst watching the world serpent…

So well done everyone at Santa Monica Studios, you have got me…